I can't believe I haven't posted since December! Pathetic! I will try to do better this year - promise!

The first reason I haven't been posting is because my laptop broke. Dead. Kaput. Never to be used again. That has been seriously cramping my style. Even though I've been lucky enough to borrow my dad's laptop, all my photos are on the old one. My clever DH managed to copy all my data from the dead laptop, but all of this has contributed to my lack of blogging action.

The second reason I haven't posted much was Christmas. You could say I overestimated how much crafting I could complete. I had to ditch around 5 projects and go on an emergency shopping trip two days before Christmas. 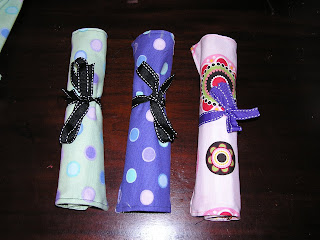 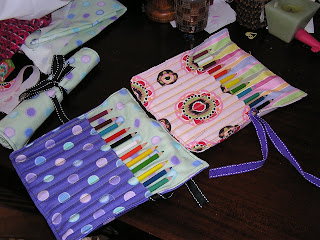 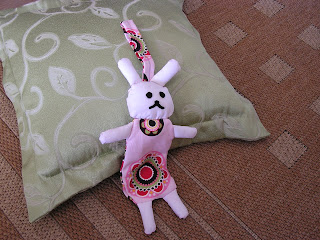 The pencil rolls were really easy! It helped that I used home furnishing material, so I didn't have to iron on any interfacing.

The wrist bag was surprisingly tricky. I had no idea that it would be so hard to sew a curve with the sewing macine.

I did make a couple of other things...but haven't taken photos, so they will have to wait for the next installment!
Posted by ChingyPingy at 12:34 AM

ChingyPingy
I've been a keen reader and crafter since I was a little girl. I work part time and have two children, a daughter (ChingyPingy) and a son (Mr McGillicuddy) as well as my lovely husband. I am also very interested in mathematics and am trying to work out a way to incorporate my love for numbers into my life.

The Truth About Melody Browne
by Lisa Jewell

Room
by Emma Donoghue
Really interesting and moving story of a boy who has spent his life locked in a room with his mother. The bond between the mother and son is so strong and moving and the hardships they have to endure are terrifying. I considered giving this...

One Day In May
by Catherine Alliott